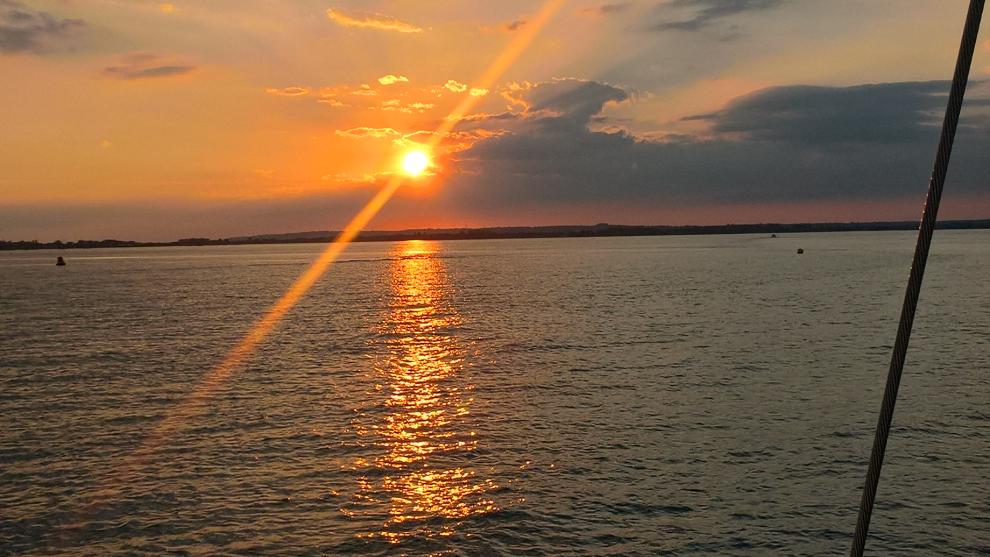 Dylan and Chloe made bacon sandwiches in our tiny kitchen before we sailed out of Beaulieu. After we came out of Beaulieu River, we set the sails (even though there was not much wind) so we needed help from the engines. We reached around 7-8 knots. Before approaching Studlands Bay, we saw the Old Harry rocks and his wife (well what was left of her).

We arrived at Studlands Bay. The beach was lovely, golden sand and blue water with a never-ending view of trees in the New Forest. Everybody went swimming together even though Chloe, Alannah and Jordan wouldn't go past the sea weed due to the feeling between our toes. After getting used to the sea weed, Jordan, Alannah and Francesca helped Chloe to become a stronger swimmer. We all went for a walk, down to the rocks, where we saw beautiful mini fish, little shrimps and nasty crabs that liked to try to eat our toes!

When we go back to the boat Mike let us jump off it into the English Channel. YES, we have officially swum in the English Channel! We then had the most amazing fish and chips followed by a chilled out evening watching the football. We lost!

On Sunday 2nd October Curve Theatre in Leicester hosted a hugely successful presentation event for the My Books, My Story project.

Following the success of the "My Books, My Story" Highcross exhibition, the work of our young people has gone virtual.

The Early Years Foundation Stage is a a busy time in a child's development.

Children in Care: ‘My Books My Story’ exhibition in the Highcross Shopping Centre, Leicester
1 April 2022

The Virtual School's Year of Reading has come to a close after 12 months of highlighting the joy of reading to our children in care.

Voices 2022: The national writing competition for children in and leaving care
2 February 2022

The creative writing competition for Children in Care and Care Leavers aged 4-25 is now open!